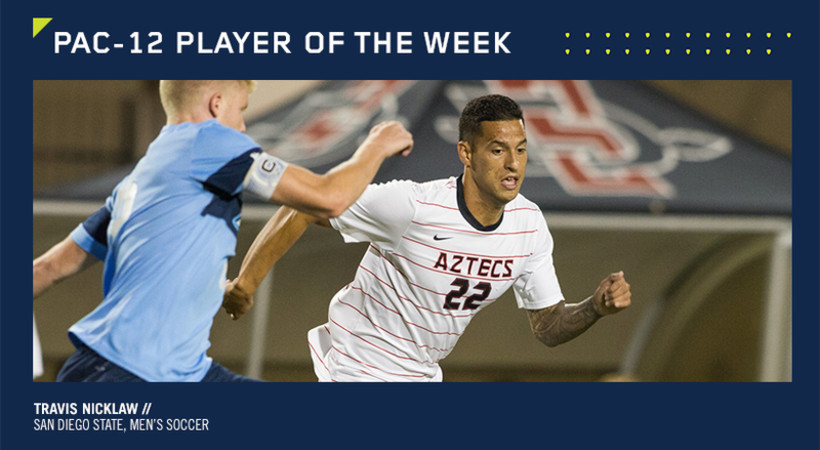 If you're wondering why this article is featured in Pacific Takes, San Diego State men's soccer is part of the Pac-12. For most other sports, the Aztecs compete in the Mountain West Conference. SDSU mens' soccer, basketball and football have each experienced Top 25 rankings during 2016.

San Diego State forward Travis Nicklaw made more headlines when he earned his second straight Pac-12 Men's Soccer Player of the Week award after driving the Aztecs to a thrilling 1-0 OT victory at home over No. 16 Washington on Oct. 2, announced Tuesday.

Nicklaw delivered his third match-winning tally of the season after recording the golden goal in the second minute of overtime on Sunday against the Huskies. With his goal the San Diego native and University City High graduate is now tied for 10th in the nation with three game-winning goals, including decisive strikes against No. 1 Akron on Sept. 2, and San Diego on Sept. 25.

Nicklaw led the Aztecs with eight shots as of this past weekend, launching four attempts each in matches vs. Oregon State and Washington, helping SDSU open up to a 1-0-1 start in Pac-12 play. After missing the first two contests of the season, he has amassed 18 shots on the year, including seven on goal.

The Aztecs Men's Soccer program is making waves in the Pac-12. Perhaps its a precurser to more interaction by SDSU- a university on the rise.