Arizona Adaptability: The Strengths and Weaknesses of the 3-3-5

Arizona plays one of the more unique defenses in all of college football. We break down how it works and what it lacks. With lots of pictures!

Share All sharing options for: Arizona Adaptability: The Strengths and Weaknesses of the 3-3-5

Down in Tuscon, the Desert Swarm defense of the 90's no longer reigns. The adaptability that it brought to the table remains in the 3-3-5 defense that Rich Rodriguez and Jeff Casteel have taken to Arizona. In the way that Dick Tomey's Desert Swarm wasn't strictly a 5-3, calling the Arizona defense a 3-3-5 is a misnomer. They use three down lineman, three linebackers, two corners and a safety, but they also use two linebacker/strong safety hybrids. These two positions are called Spur and Bandit. This allows the Arizona defense to use a multitude of looks, when combined with their bigger linebackers. An article by Chris B. Brown explains the 3-3-5 in general.

The Arizona 3-3-5, on first glance at the game film uses their defense in a multitude of looks. I saw 3-4, 4-2-5, 3-5, and 4-3 looks used on various possessions. What this does is it confuses offensive lines and their protection schemes. The Arizona defense can and will bring pressure from anywhere, which when combined with a stunting defensive line, can confuse offensive lineman on their blocking assignments, leading to sacks, negative plays and whatnot. It is a defense where each player is responsible for a specific gap in the defense, which allows for players to be aggressive. The old coaching adage of "if you make a mistake, make it an aggressive mistake," comes to mind in this defense. A lot of what can make the 3-3-5 productive is in the calls made by the coach. Disciplined aggression is what makes this work.

Take this play from the second quarter of the Nevada game for Arizona, and was one of the defense's two sacks on Cody Fajardo. Arizona initially lines up in the 3-3 stack, nickel coverage, with the linebackers over the defensive lineman. The outside linebackers move up outside the defensive ends. The initial formation is below. 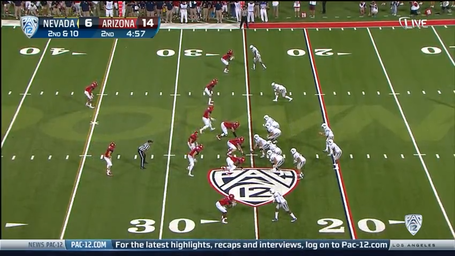 Arizona brings pressure off the edges while still keeping six men back in coverage. They also run a pinch stunt with their defensive ends. The pinch is exactly what it sounds like, with the defensive ends stunting into the middle of the line on the snap. This leaves the tackles one on one with faster outside linebackers. 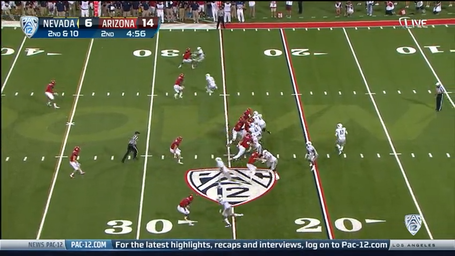 This causes one on one situations in the trenches, and Arizona's coverage holds up nicely as the outside linebacker pressure pushes Fajardo into the sack. When the coverage can hold (I believe they're playing a Cover 2 on this play), linebacker pressure and d-line stunts can take their effect. 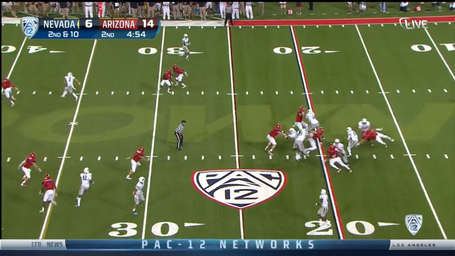 The 3-3-5 makes its money in stopping the run in spread offenses though, due to the more aggressive way of defending and attacking gaps. The Spur and Bandit positions can come up in run support more readily than safeties would in a normal 3-3-5 alignment. Again, this allows for the linebackers to play with more reckless abandon, knowing that they have solid tacklers behind them. That showed on a 2nd and 6 late in the 3rd quarter. Arizona comes out in the base 3-3 stack as shown below. 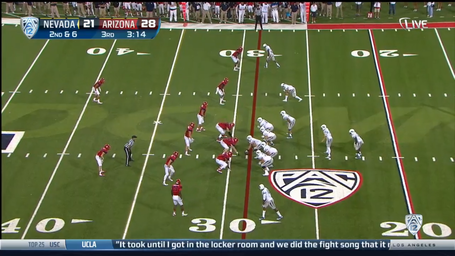 Outside linebackers come up to rush, putting the blocking scheme for this play in a bind. 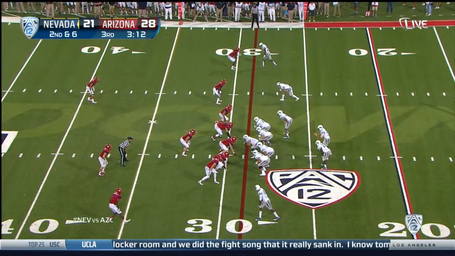 Nevada runs a zone read with power blocking by the line. The only problem with this is that the left guard is too slow to kick out the rushing linebacker. 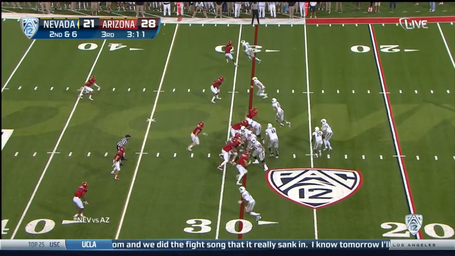 That linebacker makes piecemeal of the attempt at a block, and launches himself at the mesh point, resulting in Fajardo and James Butler going down like bowling pins. 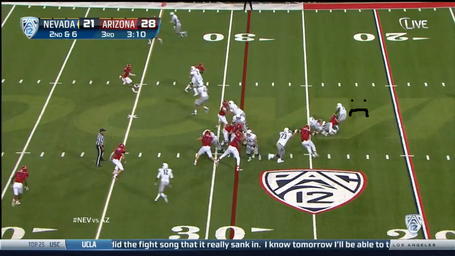 The play is blown up for a four yard loss, causing a long third down. That third down led to sack, which led to a punt. Aggression is rewarded in this case.

The downside of the 3-3-5 is when the aggression is taken advantage of. This defense cannot get a rush without rushing linebackers, something frequently mentioned by Arizona fans in their criticisms of the defense so far. Arizona's defense is dependent on the pass rush to put pressure on quarterbacks, but this can leave holes that are ready to be exploited by a good playcaller and a quarterback that can execute.

Take this play near the beginning of the game. Nevada has a 3rd and 7. They decide to go with five wide receivers, an obvious passing formation as shown below. 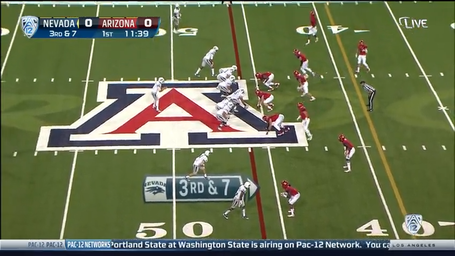 Casteel decides to dial up an all out blitz and rush his three linebackers. This leaves a massive gap between the pass rush and the safeties who have to come down in man coverage. 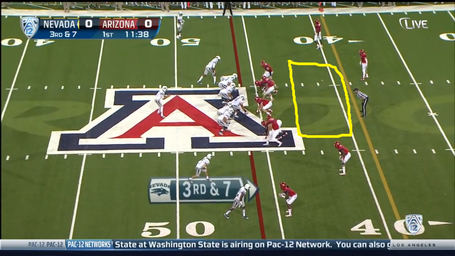 Nevada takes advantage of this, throwing a quick slant over the middle for a ten yard gain and an important first down. This drive would eventually end in a field goal, but it could have been even less if the defense wasn't greedy. 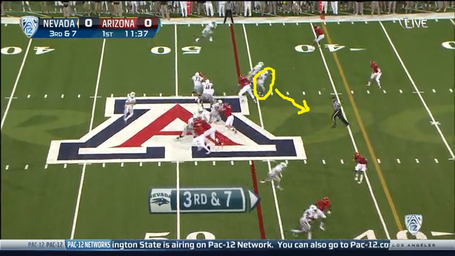 This is the nature of the beast for the 3-3-5. Some aggression is rewarded, but it relies heavily on making the right call. It can be exploited by quick and intermediate routes by quarterbacks who don't have David Carr syndrome. This will be the Wildcats' biggest challenge this weekend against Cal. A lot of the Bear Raid is based on quick passes, whether they be to the sideline or up the middle. I believe that Jared Goff is a better quarterback than anyone that Arizona has faced so far this season. It could be trouble for Arizona if Casteel can't outdo Cal offensive coordinator Tony Franklin on the playcalling front. It will be something to watch for on Saturday at 7.